July 09, 2016
We are very blessed to have a new car sitting in our driveway for our use. We farewelled our trusty Hyundai iMax a week ago and we're now in the possession of a Volkswagen Caravelle.

Given that I've always been a bit of a car buff, I thought I'd offer my opinion on what we've found useful for our family. There are general car reviews - usually written by men - but there's a whole new world of potential and mystery surrounding the family car that mothers can shed light on. 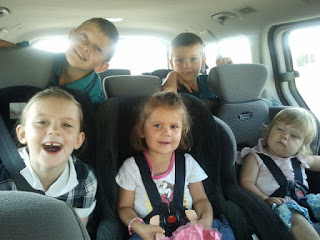 The inside of our iMax, just after we purchased it.

The Hyundai iMax is a great family car! It's very popular and prior to us purchasing ours in 2012, it had won RACQ's 'Best People Mover' for four years in a row. As a hard-core Ford-Holden-Mazda-Mitsubishi-type girl, I struggled with owning a Hyundai because of their reputation for cheap, plastic cars, but the evidence was clear: we needed an 8-seater van that was economical, safe and roomy and the iMax met all those requirements. 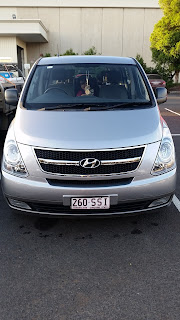 Hyundai have now come a long way - and all the mechanics I've ever talked to agree! I have to say that my opinion of Hyundai has improved from deep loathing to fairly tolerant now - all because of the iMax.

For starters, the iMax has a good safety rating. That was the clincher for us. All the other things about it sounded great, but the fact that they could provide a safe car for us to travel in was the cherry on the cake. Everything else we looked at was too expensive, too unheard-of or simply too small.

Secondly, the iMax was a big, roomy, economically-priced car to purchase and run. It lacked the flexibility of a Toyota Tarago with the folding seats and the Volkswagen Multivan with the reversible seating arrangements. However, it more than made up for it with the massive (and I mean massive) boot. There was easily a metre and maybe a bit more between the seats and where the door closes - not including the bumper bar. I loved throwing in the pram any which way in the back, not having to shuffle things about. 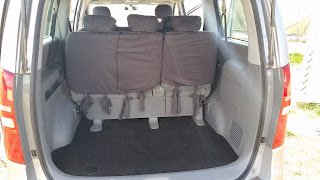 For such a big car, it's so easy to drive. We chose a diesel model, which had heaps of grunt. A couple of times we drove a petrol iMax and it was like driving a jumbo with an ultra-light engine! If you're considering an iMax, definitely try a diesel one - we found the difference huge.

It's longer than a lot of 'normal' vans, but it does have rear parking sensors. Parking is the only time when I really felt the size of the iMax. Even then, I got used to it. Whilst travelling, one could easily think that they're driving a sedan. Everything is easily within reach on the dashboard, although I did find the lack of cavities in the dashboard for a phone, purse, etc very irritating. There was a storage receptacle on the top of the dashboard which was unsuitable for some items as it copped full sun in summer. 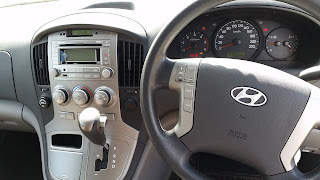 Ultimately, the iMax is a big, economical, no-fuss family vehicle. I'm happy to recommend it, as long as potential purchasers understand that there are a few down-sides to the economy of Hyundais. The issues I have with the iMax are mainly to do with comfort.

There's a handy handle to grip as you hoist yourself into the driver's seat, but not the passenger seat. Annoying. The seatbelts in the middle row are attached to the wall - limiting your options for seating with child car seats and children to get into the back row. A much more practical option is to have the seatbelts fitted to the seats. Apparently, this has already happened and we just missed out on the model where this was fitted. We only had one or two stretches of a couple of months where we had to unbuckle car seats via the seat belt in the middle row to get children into the back row of seats. It was still really annoying!

Apart from those niggling little things and the lack of storage space in the dashboard, the only other thing I really didn't like about the iMax was the servicing. It was a bit pricey and the service was terrible at the dealership! We ended up going elsewhere to have our car serviced by people who talked to us and communicated effectively.

Overall, I, the world of mechanics and RACQ find the iMax to be a very suitable car for families.

Thus endeth the transmission of my opinion.

Mummy Car Reviewer, over and out.