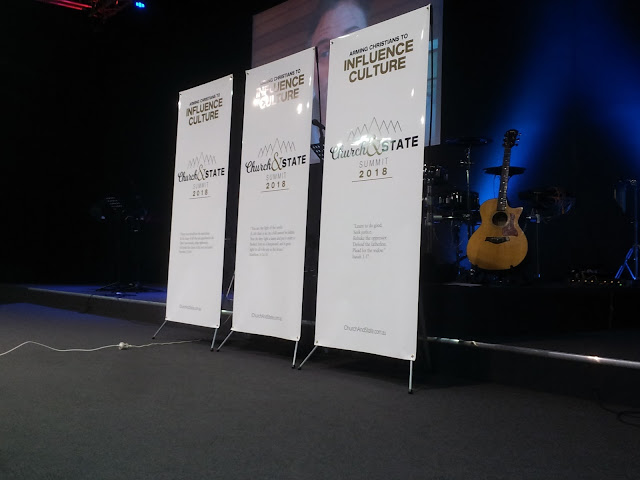 John Anderson, former Deputy Prime Minister and Leader of the National Party was the first speaker at Church and State Summit for 2018 - and my favourite speaker at the summit.

Shamefully, I realised that I'd put him in the 'gentleman' basket, but hadn't realised how intelligent and eloquent he is. Duh - he was Deputy PM, of course he's gotta be intelligent!


"Politicians are a mirror image of the society that puts them there." - John Anderson

So, the history of those wanting to keep morality out of politics has a pretty sinister background - and that hasn't changed. Mr Anderson stressed the need to know our history in the fight to keep our freedom of speech, religion and concert (assembly). I'm motivated to read more biographies on those who changed history or simply lived our their faith with wonderful consequences.


"People who are deeply committed to the welfare of others should never be silenced." - John Anderson

The point of history is that Christianity, even for unbelievers, is a civilising influence on a society. This is historical fact. Many are trying to make Australians forget their Christian heritage to create chaos.

Once Mr Anderson had pointed out salient points about history and the repetition of it nowadays, he had further point about how to influence our culture:

Make an appointment and introduce yourself to your local state and federal MP. Mr Anderson maintains they're lonely people! I think that being an MP is a really difficult job. The hours are long, you're away from your family a lot and dealing with people as individuals and groups who are lobbying for your time, vote and energy must be totally exhausting. So I can see how building a relationship with your MP is a good and worthwhile thing to do.

Lastly, Mr Anderson referred to the current rise in transgenderism. He said that we're at the end of the age of reason, really. Science is no longer counted as relevant in the transgender debate, but we must continue to still point out the relevant science of biology with compassion. According to Mr Anderson, Johns Hopkins Hospital in Baltimore, USA will no longer perform sex-change surgery because their patient outcomes are very unfavourable and actually damaging.

This is the type of evidence, factual and irrefutable that we must keep speaking with love and compassion. We must always rely on facts, Mr Anderson pointed out, in an eloquent way. We have to know what we're talking about!

There were a few book recommendations from Mr Anderson which, of course, have been added to my 'must read' list!

He truly was an inspirational speaker, not only because he is passionate, but he's also honest, clearly has a deep love for people as individuals and Australia as a nation. If you are ever given the opportunity to hear him speak, please go and listen to what he has to say.

Next up, I'll be reporting on what Brendan Malone from Focus on the Family New Zealand had to say. It was eye-opening, let me tell you!