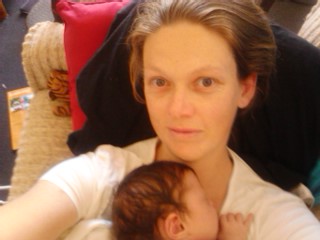 There has always been a fire in my heart for children and women. When I was in primary school, I was always in trouble for hanging around the little children in younger grades - we had segregated areas for different grades and I loved being around little ones, helping them play and get along together. My only real focus in life when I was a young girl was to get married and have babies, everything else was a peripheral goal.

As a teen, I babysat and did one year-long practicum one day a week at the local Pre-School in Grade 11. I just had a soft spot for children and their interests, plight, sufferings and joys were mine as well.

Nothing has changed with marriage and motherhood. If anything, it's intensified that fire in my heart. I'm a firm believer in healthy, well-adjusted children making healthy, well-adjusted adults. Sadly, even though I was someone who loved children, I didn't give much thought to unborn ones. I had heard bits and pieces about abortion and supposed that it was OK if the pregnancy was early and 'it' was just a blob of.....whatever.

I pictured the abortion as a quick, little scrape of something and nothing more.

That was before I read about what actually happens in an abortion from nurses and former abortion clinic workers.

Abortion is without a doubt, the most outrageous and sadistic procedure one can inflict on a human being - the little one and the pregnant one. Once I read what an abortion involves for mother and child, I instantly became pro-life.

There is plenty of information out there about what an abortion procedure involves, I am not going to list it here. Let me just say it involves instruments that look like they belong in a torture chamber, not around little babies.

There are arguments about foetal pain capability and the risks of pregnancy/labour and the ability of mothers to raise children as single parents...........


Oh yes, you shaped me first inside, then out;
you formed me in my mother’s womb.
I thank you, High God—you’re breathtaking!
Body and soul, I am marvelously made!
I worship in adoration—what a creation!You know me inside and out,
you know every bone in my body;
You know exactly how I was made, bit by bit,    how I was sculpted from nothing into something.
Like an open book, you watched me grow from conception to birth;
all the stages of my life were spread out before you,
The days of my life all prepared
before I’d even lived one day


(italics my emphasis)
God allows each pregnancy. He does not necessarily endorse the way in which a pregnancy is achieved. But He allows each life to exist. Once we start deciding for ourselves who lives and dies, we are crowning ourselves authors of life. Given the current climate in our world, I think human beings are the last ones who should decide who lives and dies.

Life deserves respect. It's a gift and it's sacred.

I do not speak for any other pro-lifer except myself, but I find myself increasingly horrified at the creeping euthanasia by well-meaning advocates. There are arguments for and against, both honourable and sincere - but it all comes back to this: Life is sacred. Suffering is sacred. We must allow and honour both.

For a long time, I sat on the fence in regards to the death penalty. But I eventually saw what a hypocrite I would be if I was OK with defending the life of unborn humans, but not convicted ones. Life must be respected.

Through my battle with depression and suicidal tendencies, I realised that death is so final. There's no second chances. I cannot justify the decision to take someone's life because they're a murderer, or suffering or a voiceless, unborn child. Life is sacred.

There's a lot of confusion about what pro-life actually means in practical terms. Let me offer here some guidance on my understandings on what is acceptable and what is not for those who are pro-life:

-Pregnancy in cases where the baby is given very little or no chance of survival post-birth for me comes down to one thing: do parents of a child who will pass away soon after birth wish to carry the weight of the decision to end their child's life? Or do they deserve to bear no burden for their child's passing and be there to hold and love their child, even for the few short minutes or hours they're alive on earth? Guilt is a powerful thing and a heavy burden for grieving people to carry. Allowing a baby to pass naturally is a much gentler choice.

-Euthanasia is a very difficult topic and very emotive. I believe euthanasia sounds great on the surface, but like all ideas from the political left, have a very dark side. The great deficit of euthanasia, rendering it a dangerous practice is when patients feel it is their duty to die. Or when rich Aunty Mary is convinced by her 'loving' family to die so they can enjoy her inheritance sooner. It's naïve to think that this won't happen or to think that it's just a part of euthanasia that we have to live with. Life is sacred and deserves to be treated with reverence.

-The death penalty removes any chance of a person being rehabilitated or changed or being used to bless others, even in prison. I don't necessarily believe that those who would otherwise be executed should be freed from prison and integrated back into the community, but I think that everyone still has a purpose, whether it's in hospital, prison, palliative care or in the community doing their regular, every day job.

-Pro-lifers are pro-active. Like any group of people, there are always those who don't do the right thing, but on the whole, pro-lifers are amazingly pro-active in supporting unexpectedly pregnant people. One of the major aims of the pro-life movement is to humanise the unborn. This is done beautifully and sensitively by Emily's Voice. Eva's Place in Toowoomba, along with many other organisations, support people to have their babies rather than telling them they won't cope, etc.

The other thing that pro-lifers are, is lonely.

Christians in the west are more interested in Facebook, catching up with friends and My Kitchen Rules than the increasing tide of darkness in the form of barbaric and evil practices coming across our world.

Life is worth protecting. It's worth you finding out what that means!

Not everyone is as active in the pro-life community as others. That's OK. But it is nothing to offer up a prayer for abortion. It's nothing to give $10 a month to Emily's Voice, Right to Life Australia or Cherish Life. It's nothing to attend the March for Life in Brisbane on March 5th.

It's nothing to spend $90 for two tickets to the Emily's Voice Gala Dinner held in late August each year, which informs, encourages and blesses those who attend, as well as helping fund the wonderful Emily's Voice ads on television. Just doing one of those things will help unborn children so much!

We need to speak up for those who cannot speak for themselves. If you aren't willing to do that, then you're not following in Jesus' footsteps. You're not obedient to Christ. You're not honouring God's gift of life.

Life is sacred. Life deserves respect. Life is a gift.

UPDATE: As per Mary Ellen's request, please also visit www.pregnancycounselling.com.au for 24/7 help if you're experiencing an unexpected pregnancy.